so what are your favorites mangas / animes?
Yuki_kuran12345

Favorite animes, well i watch a bunch of random animes all the time... it's hard to choose a favorite but here are a few I really liked -

2-vampire knight(obviously that is why i am here)

4-one i don't remember its name but it had a kid named komi who possessed her grandmother's body(if someone knows that anime please tell me what was its name,i saw it when i was a kid)

6-the legend of snow white(loved it)

gintama is my favourite manga

Favourite Manga:
Vampire Knight (despite the ending/last arc I still enjoyed the first 14 or so volumes)
Kuroshitsuji
Gantz (I've stopped reading it, but I decided to still add it because it started off really well and up until recently it was interesting/intense)
UraBoku
Kamisama Hajimemashita
Shinrei Tantei Yakumo

Reading right now: Bleach/Naruto - I can't say they're my favourite manga or anime since there's a lot of BS going on for both. However they hold a special place in my heart because they one of the first mangas I've started to read and they have characters that I absolutely love.

Well my favorite mangas are:
1-Vampire Knight(i still love the manga until volume 14,cause i love Yume Couple) 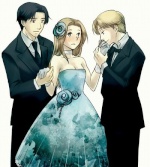 I love Vampire Knight and Kaname sama, but after Sara arc the plot is going downhill. so does my opinion on this manga. but not Kaname sama of course
Sponsored content

» Shoujo Mangas?
» Which type of mangas/anime do you prefer?!~
» Favorite VK character